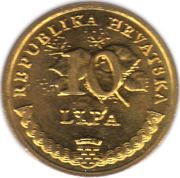 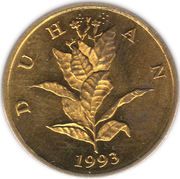 A stylized linden branch is in inflorescence and the value of the coin (10) on the leaves and the written inscription "LIPA" (linden) underneath. Around the top edge, the words "REPUBLIKA HRVATSKA" appear along with the Croatian coat of arms on the bottom, and braided ornaments on both sides of the arms.

A stalk of the tobacco in an inflorescence is in the center and the Croatian name of the plant (DUHAN) above and the year of mintage and the artist's initials on a leaf.

NOTE: The engraver of the coin, Kuzma Kovačić, is a distinguished Croatian academic sculptor.