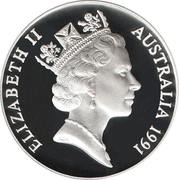 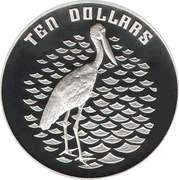 The Black-necked Stork is more commonly known as the Jabiru or sometimes the Policeman-bird. It is mainly seen in Northern Australia. Singly, in pairs or small parties the bird frequents swamps, saltwater creeks, tidal flats and lagoons. It is often spotted quietly stalking for fish, crabs and carrion, and every now and again making huge strides and jabbing its prey with its huge bill.

Bullion value: 16.31 USD Search tips
This value is given for information purpose only. It is based on a price of silver at 882 USD/kg. Numista does not buy or sell coins or metal.