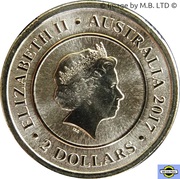 Depiction of the Planet Mars in pad printed Orange/Red.
Surrounded by Rocky Landscape with two Mars Rovers & Stars.
Planetary Symbol of Mars below.

This particular $2 coin represents Mars the 4th Planet and has the Planetary Symbol for Mars on the reverse along with two Mars Rovers.