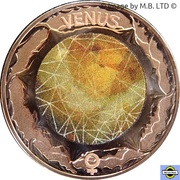 Depiction of the Planet Venus in pad printed Orange/Yellow. Surrounded by six erupting Volcanoes spewing toxic gas into the atmosphere. Planetary Symbol of Venus below.


This particular 2 Cent coin represents Venus the 2nd Planet and has the Planetary Symbol for Venus on the reverse along with erupting volcanoes.