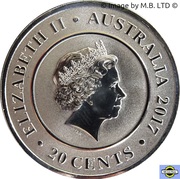 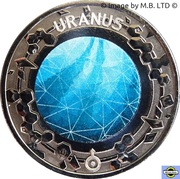 Depiction of the Planet Uranus in pad printed Blue/White.
Surrounded by Angular Shapes.
Planetary Symbol of Uranus below.

This particular 20 Cent coin represents Uranus the 7th Planet and has the Planetary Symbol for Uranus on the reverse surrounded by Irregular Jagged & Hexagonal shapes.