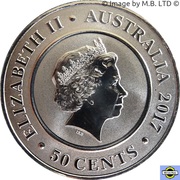 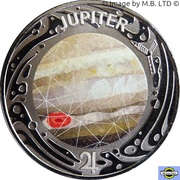 Depiction of the Planet Jupiter in pad printed White/Yellow/Red showing the famous Red Spot. Surrounded by Swirls and Circles representing the many Moons of Jupiter with the Spacecraft Galileo top right. Planetary Symbol of Jupiter below.

This particular 50 Cent coin represents Jupiter the 5th Planet and has the Planetary Symbol for Jupiter on the reverse surrounded by circles representing Jupiter's Moons and the spacecraft Galileo which orbited Jupiter for nine years before crashing into the planet. The coin is also circular instead of the usual 12 sided design of the Australian 50 cent coin.