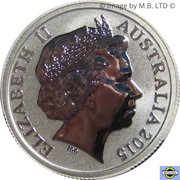 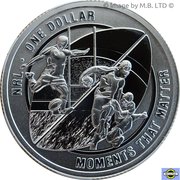 This Fine Silver (.999)  NCLT coin released by the RAM commemorates the 2015 NRL Telstra Premiership Season. The coin, limited to a mintage of 4,433 was released in a numbered presentation box encased in a coin capsule. The release was known as The Ultimate Collection NRL With Silver Dollar - Sealed Lucky Dip

Bullion value: 9.52 USD Search tips
This value is given for information purpose only. It is based on a price of silver at 817 USD/kg. Numista does not buy or sell coins or metal.