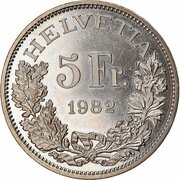 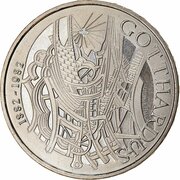 100th anniversary of the opening of the Gotthard Railway

Oak and alpenrose branches tied with a ribbon below.

Bernhard Luginbühl was one of the best known Swiss sculptors. He became famous with his iron sculptures in the late 1950s. In 1976 he started with building giant wooden sculptures which he sets on fire as an art event.