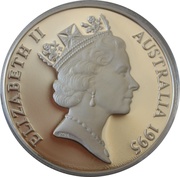 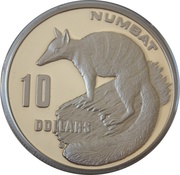 This coin is a piedfort version of KM#296 and is part of a series of four Sterling Silver (.925) Proof coins released by the RAM to highlight Australia's Endangered Species.

Numbats are small marsupials, easily recognised by the wide black and white bands across their rumps. Once widespread, they are now only found in a small pocket of south-west Western Australia.
The clearing of land and introduced predators such as foxes and feral cats are responsible for their demise. They shelter in burrows and hollow logs, eating termites and some ants. surprisingly, they do not need to drink. It is not too late to save the Numbat if we take immediate steps to protect their remaining habitat and control predators.

Bullion value: 31.45 USD Search tips
This value is given for information purpose only. It is based on a price of silver at 850 USD/kg. Numista does not buy or sell coins or metal.