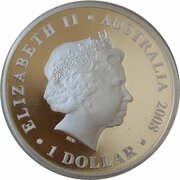 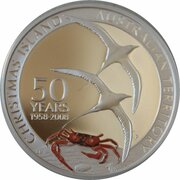 Picture of 2 Golden Bosun Birds and a Red Colourised Crab.

Struck by the Perth Mint to commemorate the 50th Anniversary of Christmas Island becoming an Australian external Territory.

Bullion value: 28.69 USD Search tips
This value is given for information purpose only. It is based on a price of silver at 912 USD/kg. Numista does not buy or sell coins or metal.