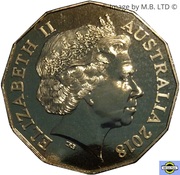 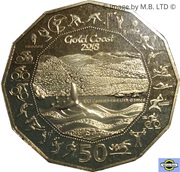 This design features a Gold Coast beach with a whale frolicking in the surf, surrounded by pictograms of the 23 sports which will see athletes competing for gold medal glory at the Gold Coast 2018 XXI Commonwealth Games.

This NCLT Gold Plated 50 cent coin was released by the RAM in a coin card to commemorate the XXI Commonwealth Games held from 4th April 2018 to 15th April 2018.

One of Australia's greatest honours in 2018 is hosting the XXI Commonwealth Games. The stunning Gold Coast, with its golden sun and sandy beaches, will host athletes from 70 nations and territories competing in 23 different sports.

Australia Post also released 7,500 copies of a non-Gold Plated version of the coin in a PNC.  (See Link below)