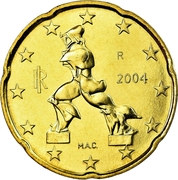 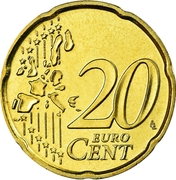 Boccioni's sculpture "Unique Forms in the Continuity of Space", encircled by the twelve stars of Europe. On the left the monogram of Italian Republic. The mint mark and the date are at right. Author's initials are below the sculpture.