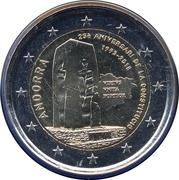 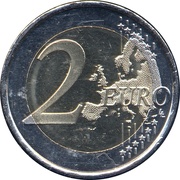 25th anniversary of the Constitution of Andorra

The design represents the "Monument to the men and women of Andorra who wanted the Constitution", which is located in the Plaza of the General Council (Parliament of Andorra). To the right of the monument is the map of Andorra with the Latin inscription "VIRTVS VNITA FORTIOR" (the united virtue is stronger) in its interior, which is the state motto of the Principality of Andorra.

The "Monument to the men and women of Andorra who wanted the Constitution" located in the Plaza of the General Council (Parliament of Andorra) shows the silhouettes of a man and a woman and commemorates the will expressed by Andorran citizenship in the referendum on March 14, 1993, to become a constitutional, democratic and social State, as expressed in Article 1 of the Constitution.