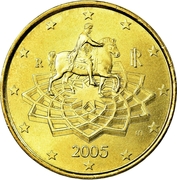 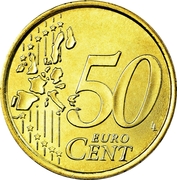 The Equestrian Statue of Marcus Aurelius, resettled by Michelangelo on the Piazza del Campidoglio, which has rosaceous paving, encircled by the twelve stars of Europe. The mint mark is at upper left of statue and Italian Republic monogram on the right. Date is below.