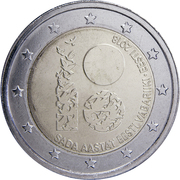 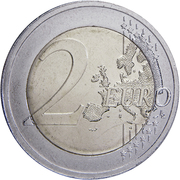 The official national logo for the centenary of Estonia in the center which can be read as the numbers 18 and 100, linking the year the state was founded with today.

Translation:
100
Years of the Republic of Estonia
Estonia 2018

The total mintage of 1,317,800 coins is symbolical for the Estonian population, one coin for every Estonian.