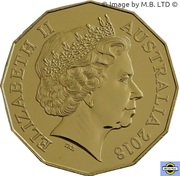 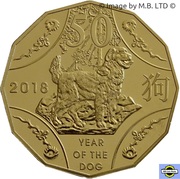 Year of the Dog - WMF Issue

Dog standing at attention in front of a tree, Chinese symbol for Dog at right, Year of issue to the left, Denomination above, Chinese scrolls within partial circles on each corner.

This RAM NCLT coin has been released for the 2018 Berlin World Money Fair in a credit card sized coincard.

Last year the corresponding coin was a simple Gold Plating of the usual 14 sided 50 cent Lunar Year Coin.
However this year the RAM have changed things around a bit. This time they have reverted to a standard 12 sided planchet for the WMF Issue and used a different reverse design to the one used on the plain copper nickel 2018 50 cent Lunar Year Coin. (See link below to view the 14 sided 2018 coin)

There have now been seven yearly releases of the Lunar Year 50 cent coins by the RAM. This is the second WMF Gold Plated edition.