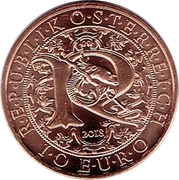 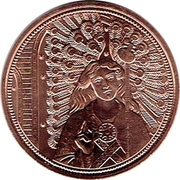 The centre features a fish and a wooden stick; symbolising Raphael, framed by the initial R, surrounded by ornate grapevine design. Name of country, value.

Austrian mint informs:
Worshipped by Christians and Jews for his special healing powers, archangel Raphael is the inspiration for the third coin in our interfaith Guardian Angels series. The talismanic properties of Raphael – The Healing Angel encompass both the body and the soul since Raphael watches over us when we travel, helps us heal and boosts our vitality.
The prototype guardian angel, Raphael is also an archangel in Islam. According to the Christian Old Testament story, Tobias and the Angel, which appears in the Book of Tobit, Raphael gave special healing powers to Tobias in the form of the vital organs of the fish that had attacked the young man in the River Tigris. On the 10 euro Proof quality silver coin’s obverse, the fish is shown crossed with a pilgrim’s staff inside the letter R, which is surrounded by the coin’s rich green grapevine design. The obverse shows an 1862 portrait of Raphael by an artist of the English School. This shows the patron saint of travellers – who is also said to watch over pilgrims – as a young man with tousled hair and wings of peacock feathers, one hand holding a pilgrim’s staff, the other raised in a blessing.
Date of issue: 14th february 2018

Members from this site want to exchange it: smotarib, coins coins coins, Tdlq87