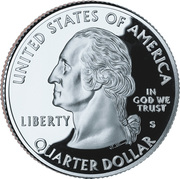 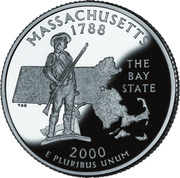 The statue "The Minuteman" against an outline of the state is accompanied with the state's name ("MASSACHUSETTS"), the date of its admission into Union ("1788"), its nickname ("THE BAY STATE") and the motto "E PLURIBUS UNUM"

Members from this site want to exchange this coin: martinhofrancisco, SteveV

Bullion value: 2.72 USD Search tips
This value is given for information purpose only. It is based on a price of silver at 484 USD/kg. Numista does not buy or sell coins or metal.