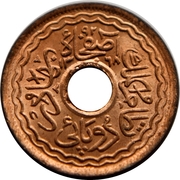 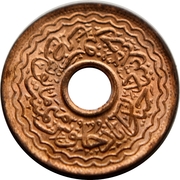 Location of date and Regnal year (click on the image below)

Hyderabad State was the richest and the senior-most (21-gun) salute state among the Indian Princely States during the period of Nizam. Hyderabad was spread over 223,000 km (86,000 sq mi) region in the Deccan, ruled by the Asaf Jahi dynasty, who had the title of Nizam and was conferred the title of His Exalted Highness and "Faithful Ally of the British Government" by the United Kingdom, the only Indian prince to be given these both statuses. The rule of the Nizams brought cultural and economic growth for Hyderabad city. One example of the wealth of Nizam rule is the Jewels of the Nizams, which is an international tourist attraction displayed in the Salar Jung Museum. The land area of the state was 223,000 km (86,000 sq mi). In 1948 it had an estimated population of 1.7 crores and an estimated annual revenue of £90,029,000. Hyderabad State printed its currency, the Hyderabadi rupee, until the introduction of the Indian rupee in 1951. The pace at which the last Nizam Mir Osman Ali Khan amassed wealth made him one of the world's richest man in 1937. As per the Forbes All-Time Wealthiest List of 2008, Nizam Mir Osman Ali Khan is the fifth richest man ever, with an estimated worth of US$210.8 billion.