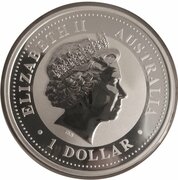 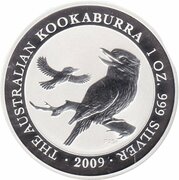 Two Kookaburras, one flying the other one perched

In 2009 the Perth Mint issued a limited edition 20 coin set that included all 19 of the previous years issues of the famous One Dollar 1oz Silver Kookaburra coin, as well as the 2009 version.

This particular coin was a re-issue of one of the previous Kookaburra coins. It included an exclusive P20 Mintmark.

Befitting the significance of this milestone release, the set was housed in a luxurious metallic-black presentation case embossed with The Perth Mint’s swan logo on the lid, and a stylishly-designed shipper.

A low mintage of only 10,000 pieces adds to the collectibility of this issue.

Bullion value: 28.33 USD Search tips
This value is given for information purpose only. It is based on a price of silver at 912 USD/kg. Numista does not buy or sell coins or metal.