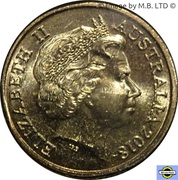 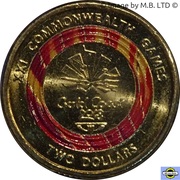 This $2 coin features the 2018 Games Emblem in honour of the host city. The other two $2 coins feature the Australian Team Logo in support of the national team, and the official mascot Borobi the Koala - all in celebration of the Games. Each are printed with the glowing colours of the sun, ocean, lush greenery and vibrant wildlife - inspired by the dynamic Gold Coast landscape.