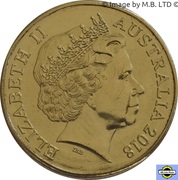 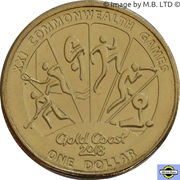 This commemorative $1 coin produced by the RAM is part of the "XXI Commonwealth Games" seven coin set made available for a price of $15 from Woolworths supermarkets from 14/3/2018. It was also available from the RAM. The set also contains three circulating coloured $2 coins and three other non-circulating (NCLT) $1 coins. The theme for the set of seven coins is the 2018 Commonwealth Games held at the City of Gold Coast.  The four $1 coins are only available in the 7 Coin Set.

This $1 coin features six of the sports to be played at the games, they are:-
Hockey, Tennis, Diving, Athletics, Boxing, Powerlifting.