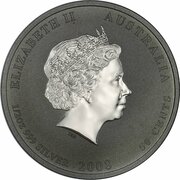 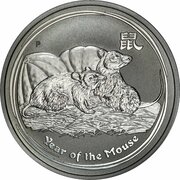 Lunar Year of the Mouse

Two mice on a bed of hay, Chinese character for mouse upper right.

The Silver Perth Lunar Series II features a different animal every year, starting with the mouse coin in 2008 followed by the ox, tiger, rabbit, dragon, snake, horse, goat, monkey, rooster, dog and pig. The obverse features the profile of Her Majesty Queen Elizabeth II as captured by Ian Rank Broadley. Although the Gold Perth Lunar Series II has also been released each year since 2008, the Gold and Silver editions feature differing designs.

The Lunar Series is based on the ancient 12-year Chinese lunar calendar, which dates back to 2,600 B.C. The Lunar Calendar is steeped in tradition and symbolism. Based on the appearance of the moon, the Lunar Calendar associates a different animal with each year in the 12-year cycle. These animals are said to have a profound influence on the personalities of people born under their rule.

Bullion value: 12.91 USD Search tips
This value is given for information purpose only. It is based on a price of silver at 831 USD/kg. Numista does not buy or sell coins or metal.