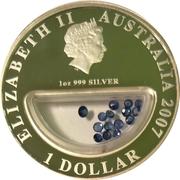 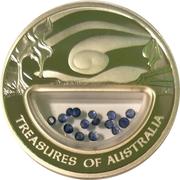 This design is an abstract interpretation of the Australian landscape.

Sapphires have been mined commercially in Australia since the 19th century, primarily in Queensland and New South Wales. Normally found in alluvial deposits, they belong to group second only in hardness to diamonds. They occur im many different colours - orange, yell, pink and purple, but blue is the principle colour of a sapphire. There is said to be a shade for every hue of sky - morning, midday and evening. Through time, the sapphire has been linked with many special properties, including wisdom, loyalty and healing. It is the modern birthstone of people born in September.

Bullion value: 27.35 USD Search tips
This value is given for information purpose only. It is based on a price of silver at 879 USD/kg. Numista does not buy or sell coins or metal.