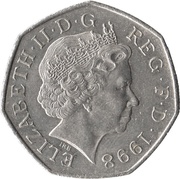 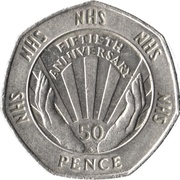 A pair of hands set against a pattern of radiating lines.

The 2009 Proof strike was issued in sets to commemorate the 40th anniversary of the 50 pence denomination.
(former Spink ref. 4612)