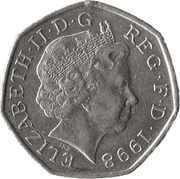 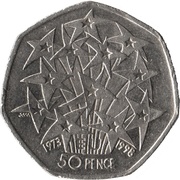 25th anniversary of UK membership in the E.U.

Celebratory pattern of twelve stars representing the 12 members of the Union, with the dates 1973 and 1998. This coin commemorates the 25th Anniversary of the United Kingdom's membership of the European Union, and also its six-month Presidency of the Council of Ministers in the first half of the year.

The 2009 Proof strike was issued in sets to commemorate the 40th anniversary of the 50 pence denomination.
(former Spink ref. 4611)