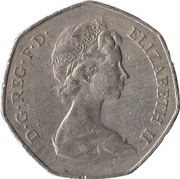 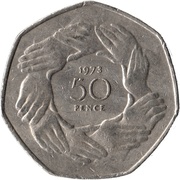 Entry into the European Economic Community

Denomination below date surrounded by circle of nine hands, symbolising the nine members of the EEC, clasping one another in a mutual gesture of trust, assistance and friendship. 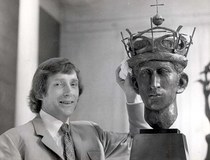 David Wynne OBE was a British sculptor of figures, animals and portraits. Born in Lyndhurst, Hampshire, son of Commander Charles Edward Wynne and Millicent, he was educated at Stowe School and then served in the Royal Navy during World War II and read Zoology at Trinity College, Cambridge, taking up sculpture professionally in 1950.

Issued to commemorate the United Kingdom joining the European Economic Community which at the time had 9 members, the coin was the first commemorative 50p struck for circulation. The coin was also issued in the Annual Proof set for 1973 (100,000 sales) as well as individually cased (no sales data). 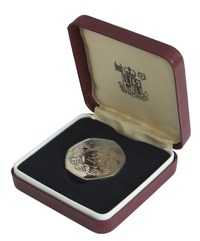 The design originally had 10 hands however with the withdrawal of Norway from the EEC the coin had to be redesigned, possibly why one hand is smaller than the others. A small number of silver piedforts were issued to officials in commemoration.

The coin was reissued in 2009 with Ian Rank Broadley's fourth portrait as part of the 16-piece sets to commemorate the 40th anniversary of the 50 pence denomination.
(former Spink ref. 4224)