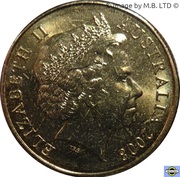 100th Anniversary of the Original Coat of Arms

To mark 100 years from when the Coat of Arms was first introduced the RAM released this Aluminium-bronze NCLT coin in a folding coincard in 2008.

The Australian Coat of Arms is the representative symbol of Australia granted by King Edward VII in 1908. It is used for authentification purposes on official documents such as passports and is used to identify government property or authority. The most significant change to the COA was in 1912 when the shield displaying the cross of St George was replaced by a version incorporating state emblems. It is interesting to note the kangaroo and the emu that are depicted are our own Australian native animals and the fact that these animals cannot walk backwards is symbolic of the nation moving forward and not backward.

A Fine Silver (.999) Proof NCLT coin was also released in a plush square black box with numbered certificate and a "C" Mintmark.

Members from this site want to exchange it: brismike, zdravko