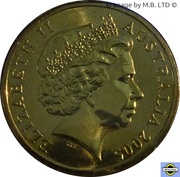 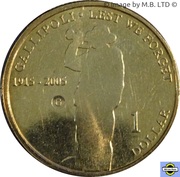 This NCLT coin was issued by the RAM in five different folding coincards in 2005 to commemorate the 90th Anniversary of the Gallipoli landings. 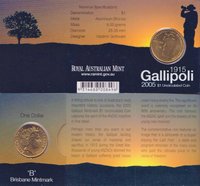 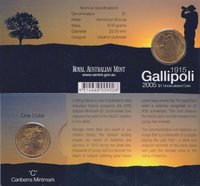 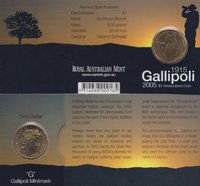 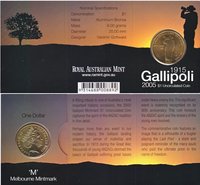 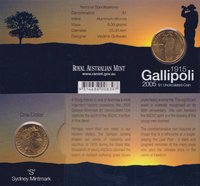 The coin was released with (C), (B), (G), (M) & (S) Counterstamps at various ANDA Shows and the Public Gallery Press at the RAM  during the year. The coin with the (G) Counterstamp shown in the above image was issued at the Australian War Memorial in Canberra. Two coins are known to have escaped without Counterstamps!

A Fine Silver (.999) Proof coin was also released in a plush brown square box with certificate.

On April 25th 1915 Australian and New Zealand troops landed on a small bay on the Gallipoli peninsula that was defended by the armies of the Ottoman Turkish Empire. The combined force from the Southern Hemisphere was known as the ANZAC (Australian and New Zealand Army Corps) force, and the bay on which they landed has become known and Anzac Cove or more simply Anzac. ANZAC Day, the 25th of April is now the single most important military holiday in both Australia and New Zealand.