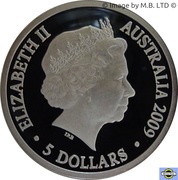 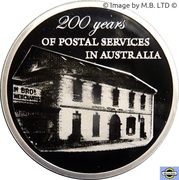 The RAM issued a special two coin set which includes this Fine Silver (.999) Pad Printed Proof $5 coin and which depicts first Post Office being the house of Isaac Nichols, Australia's first Postmaster of New South Wales. Image is pad printed from the "History of the Post Office in New South Wales" by Andrew Houison. The set also features an Aluminium-bronze $1 coin depicting an early Post Box.

Bullion value: 20.34 USD Search tips
This value is given for information purpose only. It is based on a price of silver at 561 USD/kg. Numista does not buy or sell coins or metal.