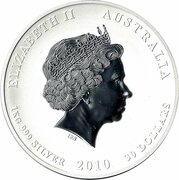 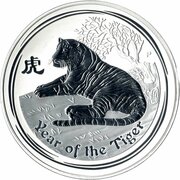 Tiger lying under a tree, Chinese character for Tiger to the left

This was the third Fine Silver (.999) coin in the Second Lunar Series Issued by the Perth Mint.

Bullion value: 886.49 USD Search tips
This value is given for information purpose only. It is based on a price of silver at 887 USD/kg. Numista does not buy or sell coins or metal.