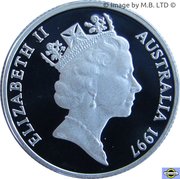 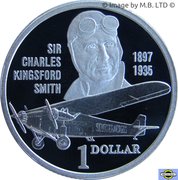 This silver proof coin was only available in the Sir Charles Kingsford Smith portfolio case published by Note Printing Australia/Royal Australian Mint. It also contained a $20 paper banknote with an overprint and is from the last print run of this design and incorporates the final prefix letters "ADK" .

Born in 1897 Sir Charles Kingsford-Smith was an early Australian aviation pioneer. He is best known in Australia for making the first Pacific crossing from Australia to the USA. Then setting a speed record from Australia to London of 10.5 days, and for disappearing while attempting to set yet more records. He is an iconic figure in Australian history and his blue Fokker Tri-Motor aircraft, the Southern Cross is equally well known in popular culture.

Bullion value: 9.56 USD Search tips
This value is given for information purpose only. It is based on a price of silver at 821 USD/kg. Numista does not buy or sell coins or metal.