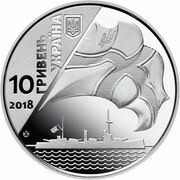 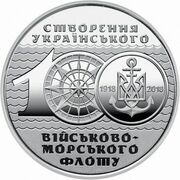 The obverse of the coin posted: at the top on a Matt background the small State Emblem of Ukraine, which is to the left of the vertical inscriptions: UKRAINE and the face value: 10 HRYVNIAS; the year of issue 2018; right on the mirror background is a stylized flag of the Navy of Ukraine of that time and the outline of a warship on the waves to the left of which is the logo banknote mint of the National Bank of Ukraine.

On the coin reverse against the background of stylized waves placed label 100, in which zero - wind rose (vector diagram describing the direction of the wind) and a Trident, superimposed on an anchor on either side of which the years: 1918, 2018. Posted labels: the creation of the UKRAINIAN (top), NAVY (bottom).

This coin commemorates 100 years since the creation of the Ukrainian navy. In early 1918, the Central Council adopted several important navy laws, which at that time had a declarative nature. Among the most important ones was the Temporary Fleet Law. On 29 April 1918, the Admiral Mikhail Sablin, who was in command of the Black Sea Fleet, guided by the sentiment expressed by most Ukrainian marine soldiers and officers, declared the Black Sea Fleet stationed in the city of Sevastopol and Crimea the fleet of Ukrainian People’s Republic, and ordered that a Ukrainian flag be raised. That day, known as Ukrainian Fleet Day, went down into history as an important event for Ukraine’s state fleet, the day “when an entire Ukrainian fleet pledged allegiance to its motherland.”