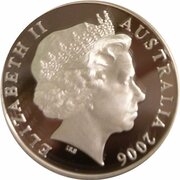 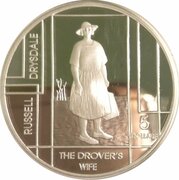 Image from the painting 'The Drover's Wife' circa 1945.

This coin depicts the work of Russell Drysdale (1912-1981) depicting "The Drovers Wife".

Bullion value: 26.62 USD Search tips
This value is given for information purpose only. It is based on a price of silver at 734 USD/kg. Numista does not buy or sell coins or metal.