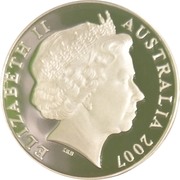 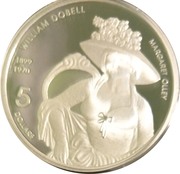 Image of the artist's portrait of 'Margaret Olley' 1948. The second of three Archibald Prizes won by the artist.

This 2007 coin was part of the  Masterpieces in Silver Set "Australian Art of the Twentieth Century" second set. The 2006 Masterpieces set was the first set in this theme.

Bullion value: 20.69 USD Search tips
This value is given for information purpose only. It is based on a price of silver at 570 USD/kg. Numista does not buy or sell coins or metal.