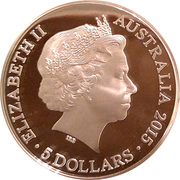 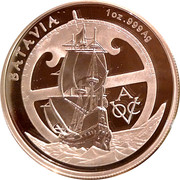 The Story of the Batavia

Features the VOC ship Batavia on her maiden voyage.

Issued by the RAM in 2015 is this Fine Silver (.999) proof coin that commemorates the voyage of the VOC Batavia.

Bullion value: 27.60 USD Search tips
This value is given for information purpose only. It is based on a price of silver at 887 USD/kg. Numista does not buy or sell coins or metal.