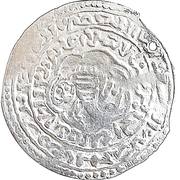 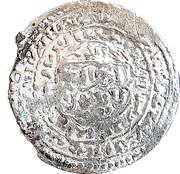 (a) Stylized lion (sometimes resembling a monkey), sitting / lying to the left, face head in a hexalobe.
(b) Lion walking left in a hexalobe.

Two series of circular inscriptions on the periphery delimited by circles; presence of a gnat.

Translation:
Islam Ali bin of the king
Sultan Mujahid sword
.. a year ago

Legends may vary from copy to copy and may be abbreviated.
The workshop, followed by the date in full, is inscribed in the outer circle of the obverse.

The iconography of the obverse alone allows us to deduce the workshop: the presence of the lion on this currency thus characterized the emissions of al-Mahjam.
The other symbols used were the fish for the city of Aden, the bird for Zabid and a man sitting for Ta'izz.

The city of Al-Maḥjam seems to have been a major pole under the rassoulid period.
Located not far from the current Az Zaydiyah, it is found in particular on a 16th century canvas depicting the Arabian Peninsula by Giovanni Battista Ramusio and exhibited at the Doge's Palace in Venice.

A member of this site wants to exchange it: Arusak

» Buy coins from the Rasulid dynasty