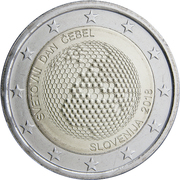 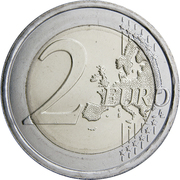 In the middle of the inner ring of the coin is the image of honeycomb in a form of a globe, which shows the eastern hemisphere. Around the honeycomb on the left upper side is the inscription ‘SVETOVNI DAN ČEBEL’, and on the lower right side the inscription ‘SLOVENIJA 2018’. The coin’s outer ring depicts the 12 stars of the European flag.

After Slovenian proposal about the proclamation of World Bee Day to the UN, United Nations General Assembly on 20th of December 2017 adopted by consensus a resolution declaring 20 May as World Bee Day. Every year on this day, the attention of the global public will be drawn to the importance of preserving bees and other pollinators. People will be reminded of the importance of bees for the entire humanity and invited to take concrete action to preserve and protect them. The resolution was co-sponsored by 115 UN Member States, including the USA, Canada, China, the Russian Federation, India, Brazil, Argentina, Australia and all the European Union Member States.