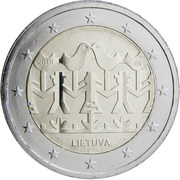 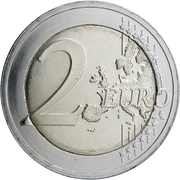 The national side of the coin features stylised figures of people and birds that are symbolic of the Lithuanian folk dance and song and typical of paper cuttings, a Lithuanian folk art genre. The coin also features the inscription LIETUVA (LITHUANIA), the year of issue (2018) and the mintmark of the Lithuanian Mint. The coin’s outer ring bears the 12 stars of the European Union flag.