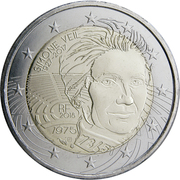 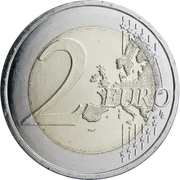 The design displays a portrait of Simone Veil, an icon in the combat for women’s rights.
Simone Veil, born Jacob, left us in June 2017 at the age of 89. After surviving deportation to Auschwitz, she went on
to become one of the most important actors in Europe’s building. She was the first elected president of the European
Parliament from 1979 to 1982. She symbolizes the depenalization of abortion she fought for with the law bearing her
name voted in 1975. In 2008, she is elected at the French Academy.
Her deportation registration number appears on her collar. The background depicts the European Parliament on which
her name, key dates, indication of the country ‘RF’, year of issuance ‘2018’ and the mintmarks are inscribed.
The coin’s outer ring depicts the 12 stars of the European flag.