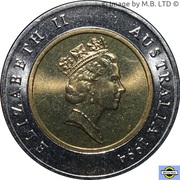 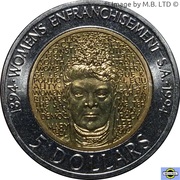 This coin was Australia's first NCLT bi-metal coin and was struck by the RAM as a tribute to Mary Lee, the leading South Australian Suffragist who was part of the movement to establish the Enfranchisement of Women in South Australia. It was released in a credit card style coincard.

An Aluminium-bronze Proof version of the coin was released in a capsule in a plush case.