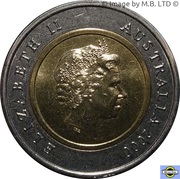 Jockey atop Phar Lap racing, right, within a circle, divides date, value below the circle

This was the fourth NCLT Bi-Metalic coin struck by the RAM and released in a coin card in 2000 to commemorate 70 years since Phar Lap won the Melbourne Cup in 1930.

The link below will take you to the proof version of the coin which is a different design and not Bi-metallic.

A member of this site wants to exchange it: COWCurrency