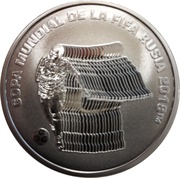 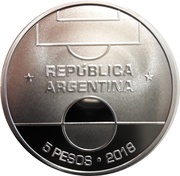 Stamp of player in motion with soccer ball, surrounded by a legend

The reverse illustrates part of a playing field, in the center it reads "REPÚBLICA ARGENTINA" flanked by two stars that symbolize the Argentine triumphs in the world championships of that sport of 1978 and 1986; in the exergue presents the face value "5 PESOS" followed by the year of coinage "2018"

Design
The main impression of the obverse, with repetition silhouette, which prints the wake player in the air while dominating the ball in his race for field creating the illusion of speed.

The reverse represents in the field of play the concept of duality in balance with the complementary opposition, where the presence of one half of the court (for example, the one that contains the two stars that symbolize the tournaments obtained by our country) is essential for the existence of the other. Spaces demarcated by contrast and differentiated by textures, as philosophical principles in constant harmony, territory where both rivals dispute the contest and break all that symmetry with a single ball.

Bullion value: 22.01 USD Search tips
This value is given for information purpose only. It is based on a price of silver at 881 USD/kg. Numista does not buy or sell coins or metal.