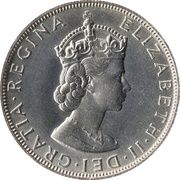 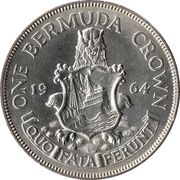 Lion holding the coat of arms of Bermuda (a ship wreck) divides date.

Translation: Where destiny leads us

The Sea Venture, a resupply vessel bound for Virginia, is shown crashing into an outcropping of rock in this detail from a map of Bermuda printed in Amsterdam in 1640 by the cartographer William Janzon Blaeu. Diverted by a hurricane in July 1609, the ship and its passengers lived on the Bermuda Islands for ten months before finally making it to Jamestown. An English colony was later established in Bermuda.

[...] the coat of arms for the Bermuda Company (a version of which was adopted as the country's official coat of arms in 1910). A red lion holds the scene of the wreck in his paws beneath the Latin inscription Quo fata Ferunt, ("where destiny leads us"). That phrase, taken from Virgil's Aeneid, would become the official motto for Bermuda.
http://www.encyclopediavirginia.org/media_player?mets_filename=evm00002900mets.xml