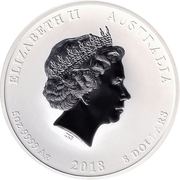 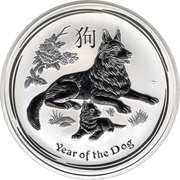 Year of the dog

A dog with a puppy surrounded by flowers. Chinese symbol on top.

Lettering:
P
Year of the Dog

Released by the Perth Mint this coin came in two versions, Proof & Uncirculated.

Bullion value: 139.72 USD Search tips
This value is given for information purpose only. It is based on a price of silver at 899 USD/kg. Numista does not buy or sell coins or metal.