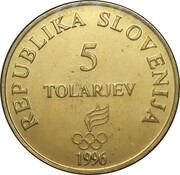 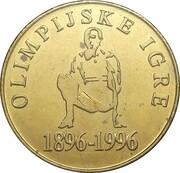 Value above olympic rings and flag

Slovenian gymnast Leon Štukelj (from photo, taken at the Olympic Games in Berlin 1936)

Man has always engaged in sports. Physical strength, helping to more easily follow the busy tempo of the modern way of life, can be built up in this way. Man has always possessed competitive spirit which made him test his abilities in different ways. In antiquity sportsmen competed in various disciplines in order to find out who was the fastest, who was able to make the longest jump and who was the strongest.
Pierre de Couberten , the great ideologist and strategist of Olympic thought, managed to revive the Olympic Games in 1894 in accordance with the ancient model. Two years later, the first Olympic Games of Modern Times took place in Athens . The Olympic flame again united sportsmen from all over the world beneath a common flag with five circles, symbolising the Olympic slogan CITIUS, ALTIUS, FORTIUS.
The Slovenes have very early participated in the Olympic Games. We can be proud of the success of Slovene fencers, gymnasts, skiers and rowers. Gold, silver and bronze medals decorate their display cabinets. The oldest and one of the most important among former Olympic participants from the whole world is the gymnast Leon Stukelj, who won his first medals as early as in 1924. Therefore it is not a coincidence that one of his characteristic postures at gymnastics (the original photo was taken at the Olympic Games in Berlin ) in 1936 was used as a motif on commemorative coins.
This year 1994 Slovene athletes will travel to Atlanta to attend the Olympic Games. They will set out on this journey not only with the goal to achieve the best possible results, but also to strike up friendships and, with their achievements, spread the name SLOVENIA around, since the Slovenes are also part of the large Olympic family.
To mark the 100th anniversary of the Olympic Games of Modern Times, the Republic of Slovenia hereby issues three commemorative coins.
Accessed at: https://www.bsi.si/en/banknotes-and-coins/slovenian-tolar/commemorative-editions-republic-of-slovenia/100-years-of-olympic-games-of-modern-times-1996