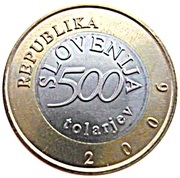 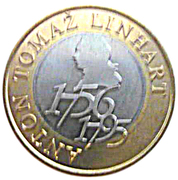 250th anniversary of the birth of the playwright Anton Tomaž Linhart

Anton Tomaž Linhart (born: Radovljica, 11 December 1756; died: Ljubljana, 14 July 1795) attended schools in Ljubljana and Vienna. After completing his schooling he found work as an archivist, and was then a school inspector. As schools commissioner for the Ljubljana district he was committed to expansion, and set up 18 new rural primary schools. He worked to establish a central library for public study in Ljubljana. It was at his initiative that the lyceum library, the predecessor to the national and university library, was founded in the city. Linhart was the first Slovenian playwright to adapt and translate a German comedy into Slovene, naming it Micka, the Daughter of a Mayor. It was the first secular play in Slovene, debuting on 28 December 1789, and this date is considered the birth of Slovenian theatre. He also wrote a longer comedy entitled The Happy Day, or Matiček Gets Married, which was not performed until 1848. With his historic work in two parts An Attempt at the History of Carniola and Other Lands of the South Slavs of Austria, he was the first to study and deal with the history of the Slovenes as a nation.
Linhart was the most important figure in the awakening of Slovenian national consciousness, the most consistent free-thinker and Enlightenment figure, and the first bourgeois in Slovenian culture. Through his work and his images he encouraged the development of dramatic literature in Slovene and made the first attempts at a scientific historiography. He also deserves credit for his work in education and librarianship.
To honour the 250th anniversary of the birth of the playwright, poet, historian and scholar Anton Tomaž Linhart, the Republic of Slovenia has issued commemorative coins featuring an outlined image of Linhart, and the years of his birth and death.
Accessed at: https://www.bsi.si/en/banknotes-and-coins/slovenian-tolar/commemorative-editions-republic-of-slovenia/250th-anniversary-of-the-birth-of-the-playwright-anton-tomaz-linhart-2006

Members from this site want to exchange it: zdravko, mikimaus, andrejs