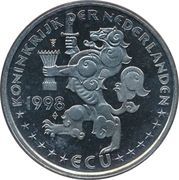 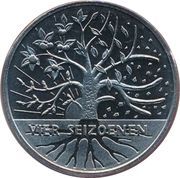 Heraldic lion of the Kingdom of the Netherlands. Lion rampant holding a sword and 7 arrows. Lettering and 12 stars around the circumference.

Image of a tree including roots depicting the four seasons, Spring, Summer, Autumn and Winter.