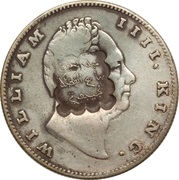 Value in English and Urdu (Yek Rupiya) within a wreath made of 2 branches tied at their base by a ribbon. English legend outside the wreath and date below.

In 1862 French merchants bought Obock, a little harbour on the Red Sea. In 1868, shipowners from Marseille settled in Tadjoura gulf. These territories were then sold to the French government in 1884 and this latter extended its protectorate over all this desertic region which sole advantage of was its strategic position after the Suez Canal being bored. In 1896, Obock, Tadjoura, Damakil and Somali territories became the French Somaliland which capital of is Djibouti. Before WW1, foreign coins were mostly circulating in this territory. Indeed, metropolitan coins were legal tender, but they were too scarce. On November 21st 1885, this obliged Commandant Lagarde to enact an order giving legal tender to Austrian Maria-Theresia Thalers and to British India Rupees and Half Rupees  (in the reign of Victoria).

Here, the counterstamp is engraved over a William IV Rupee.

Bullion value: USD 7.23 Search tips
This value is given for information purpose only. It is based on a price of silver at 677 USD/kg. Numista does not buy or sell coins or metal.

» Buy coins from the French Somaliland