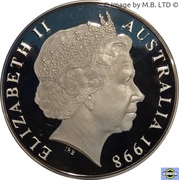 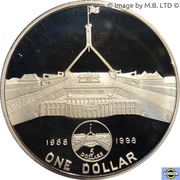 Front view of the New Parliament House over the design of the 1988 5 Dollar coin.

Released by the RAM in 1998 to celebrate 10 years since the opening of New Parliament House in Canberra. The coin was released in a capsule in a plush blue case with limited edition certificate.

Bullion value: 26.84 USD Search tips
This value is given for information purpose only. It is based on a price of silver at 849 USD/kg. Numista does not buy or sell coins or metal.